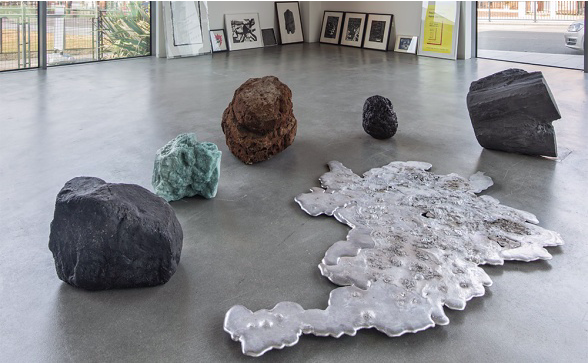 As part of Liverpool Biennial 2018 (July – October 2018) Paul Elliman presents the Vauxhall Astra 2020, the forthcoming and newest model of a car available since 1979 when General Motors launched the Vauxhall/Opel Astra, now the only car produced at Ellesmere Port. The Astra 2020 is offered as a constellation of raw materials, half-a-dozen boulders and rock-like lumps of the car’s constituent parts at original scale, made of steel (iron ore), glass, plastic, aluminum, rubber and electrical components.

Paul Elliman (b. 1961, London, UK) lives and works in London. His work follows language through many of its social and technological guises, in which typography, human voice and bodily gestures emerge as part of a direct correspondence with other visible forms and sounds of the city. Elliman is a visiting tutor for the MFA Voice Studies programme at the Sandberg Institute in Amsterdam. He has exhibited widely in venues such as the ICA, London, UK (2014); New Museum, New York, USA (2008); Tate Modern, London, UK (2001); and MoMA, New York, USA (2012) with recent solo exhibitions at KW Institute for Contemporary Art, Berlin, Germany (2017); and La Salle de Bains, Lyon, France (2017).